This is the last post of our walking trip in Yorkshire. We conquered the highest mountain in Yorkshire – Whernside and learnt a great deal about the historic and scenic Settle-Carlisle line. The specific challenge of the day was that we had a limited time to finish the walk and had to catch the train back home. We decided that if we were not able to reach the summit by 1pm, no matter where we were, we would have to turn back.

So we set off early and joined a lot of commuters on the Settle Station platform.

Just couldn’t help taking of photo of these old fashion milk bottles standing neatly on the steps. There was a note from the milkman as well. So cute!

We got off at Ribblehead Station. It was really in the middle of nowhere. There was a station master’s house (which you can book and stay!) and Station Inn. And that’s all.

There was a pretty impressive exhibition about the history of the Settle-Carlise Line with a lot of information and photos (it answered why it was in the middle of nowhere as well). I believe things are generally more interesting when you know them better. I had a very different feeling for the Settle-Carlise Line before and after I looked at the exhibition. We had a good look after we came down from Whernside. But at this point, we hurried off because we wanted to go as far as possible before 1pm.

The first sight of the amazing Ribblehead Viaduct:

According to Wiki, Settle-Carlisle Line required 14 tunnels and 22 viaducts, the most notable is this 24 arch Ribblehead Viaduct which is 104 ft (32 m) high and 440 yards (402 m) long. It looked so brave and lonely among the wilderness. 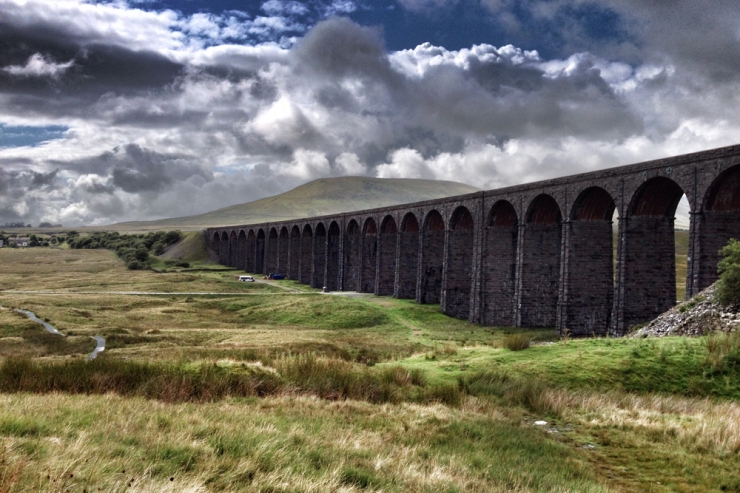 Looking back. I think the little house was the Blea Moor signal box and the mountain in the distance was Ingleborough. But I’m not sure…

Apart from many viaducts for trains, there was also a aqueduct over the train line, just above the entrance of Blea Moor Tunnel: 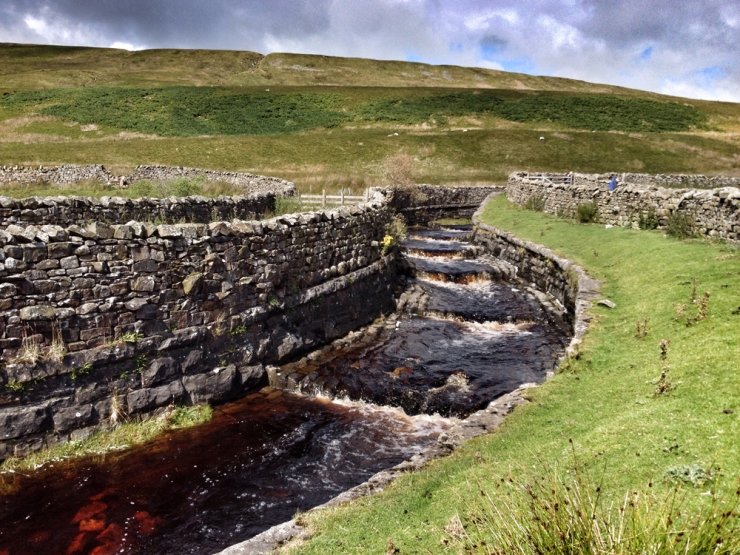 The sun came out. It was a beautiful day.

Can you see those heaps on the side of the mountain? We wondered what they were and found out later on in the exhibition that they were construction shafts and air ventilation for the Blea Moor Tunnel underneath, which was the longest tunnel on Settle-Carlisle Line at 2,629 yd (2,404 m). So the train line curved that way, 500 feet (152 m) below those shafts. The snow and rainstorm caused a lot of trouble even lives during construction. Even recently, just in 2010, ice accumulation produced this beautiful artwork but tricky problem. See image here. 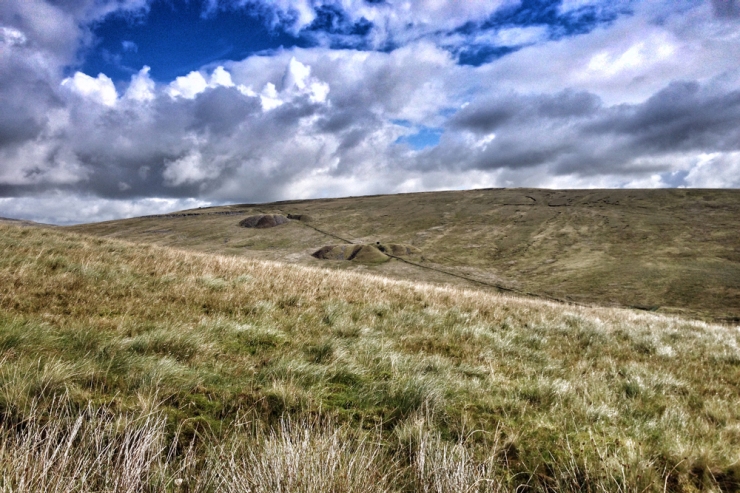 It was a very gentle ascent. However we walked a lot faster than usual which was very tiring… but it was comforting to know that we still had time! The slope was full of shake holes which reminded us that we were still in the limestone country. It looked funny, reminded me of the game ‘Hit the Mole’ in an Arcade.

Whernside was the only summit on which I didn’t get blown over. But we couldn’t see the top of York Minster because it was drizzly and cold! And we reached the top before 1pm! Which means we could go down via a different route = new scenery!

Wind shelters on mountain summits are usually where walkers have a rest and have their lunch. But I found it quite funny people still stay there for lunch even it was completely covered in rain clouds, freezing cold and wet.

On the way down. Sunshine sprinkled through the fluffy clouds. 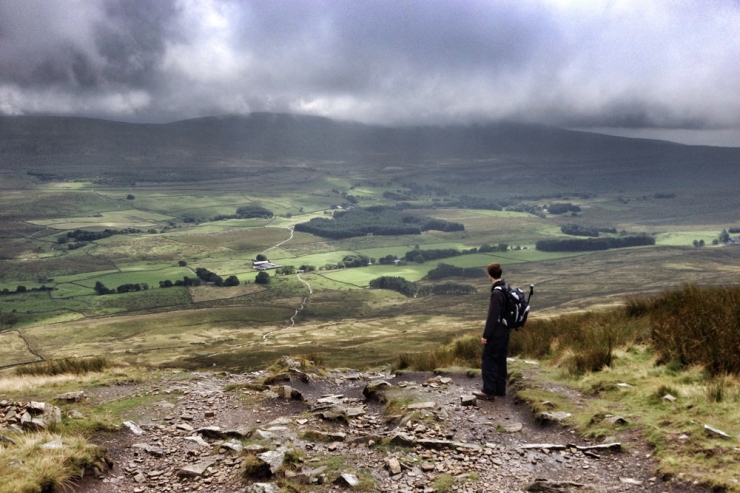 That was Ribblehead Viaduct where we came. Again, I was amazed at how far we walked in about 3 hours. It was great to know that the way ahead would be almost all downhill.

Looking back to Whernside. I like these big stones!

We arrived back to the Ribblehead Train Station earlier than scheduled. Had a cup of tea and homemade fruitcake with local cheese in the little but busy tearoom. We also had a good look at the exhibition in this award-winning visitor centre.

There were interesting stories about how passengers in 1800s had to walk one mile between two stations because of the dispute between two rival railway companies, how the construction of the line was started reluctantly but the work was done brilliantly, how the harsh and bleak climate plus diseases killed many workers who were buried in unmarked graves.

Then for many reasons from 1920s to 1980s, fewer and fewer trains ran on this line between London and Glasgow, fewer and fewer stations were kept in operation. The condition of the many viaducts and tunnels deteriorated. The whole line faced closure. The official closure notice finally arrived one day in 1984. “Seventy-two miles of what was one of the last great Victorian infrastructure projects faced the imminent prospect of being wiped off Britain’s railway map. The track would be lifted, stations boarded up and viaducts and tunnels left to decay.”*

Heroically (in my eyes at least), a protest group established and campaigned against it. These lovely people are called Friends of the Settle-Carlisle Line. Because of the extra publicity, visitors blooded in the area “believing it might be the last chance they would get to travel over Ribblehead Viaduct or through England’s highest mainline station at Dent”*.

As a result, with the support of walkers, railway lovers and local people, the campaign was hugely successful. The line was saved! Journeys per year were 93,000 in 1983 when the campaign began, 450,000 by 1989. Exactly 30 years after British Rail announced the plan of its closure, there are 1.2 million journeys a year in 2014.

Today Friends of the Settle-Carlisle Line is completely run by knowledgable volunteers, offering guided walks around the area.

Many stations along the line were full of stories too – Dent is the highest main line station in England, the Statue of Ruswarp at Garsdale railway station has a very touching story. Ribblehead station itself was closed and neglected, partly opened, fully opened and rebuilt over time. It acted as a meteorological station, a chapel with a Sunday school, a freight terminal for sheep and cattle. Now it’s fully restored with Victorian features, clean and tidy, with lights and radiators in the waiting rooms. 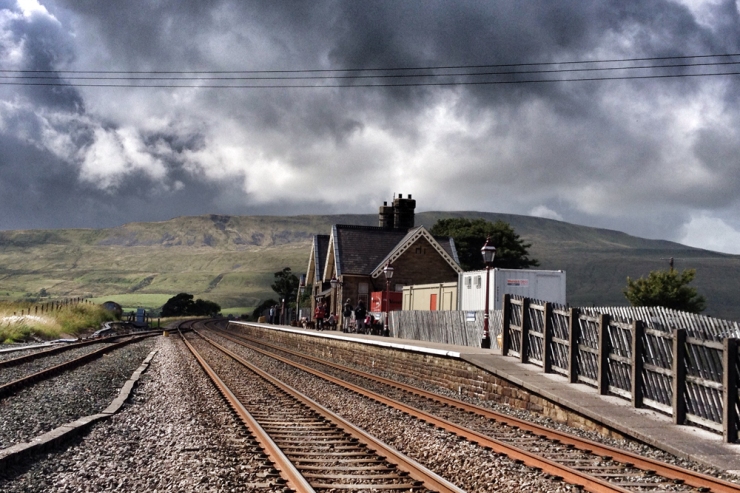 Our train finally arrived. As it rumbled on Ribblehead Viaduct, I gazed at the Yorkshire mountains fondly and said thank-you quietly to all who laboured and fought for it.

All photos by Rong Fu.