We did some mountain walking on Kumano Kodo (Kumano Pilgrimage Route). It has a long history and is significant in the local religion. It was registered as a UNESCO World Heritage site since 2004. It’s clearly well-known among international travellers, the number of western looking travellers was definitely more than the previous days. I guess it’s partly because there is something called ‘Dual Pilgrim’. Quoting the website of Tanabe City Kumano Tourism Bureau, “A ‘Dual Pilgrim’ is someone who has walked both the Kumano Kodo and the Way of St.James (Camino de Santiago). This program was developed to celebrate, honour, and share the stories of those who have completed both of these UNESCO World Heritage pilgrimage routes.” By the way, if you’re interested in walking the route, Tanabe City Kumano Tourism Bureau website is a brilliant one-stop information point for English speakers. There are also travellers like us who just enjoy walking in mountains (especially from England –  there was an interview in a local newspaper with an English couple who loved walking, bird watching and identifying plants – as English as you can get).

We were not pilgrims nor were we interested in completing the whole route (let alone two!), so we covered mileage by public transport and on foot. This post focuses on the “on-foot” sections.

We did a 7.5km walk from Kumano Hongu Taisha. It was an average difficult-level walk. It was very green. The drizzle added to the atmosphere. The path was winding around the mountain. Because of the dense plantation, there was not much of a view. 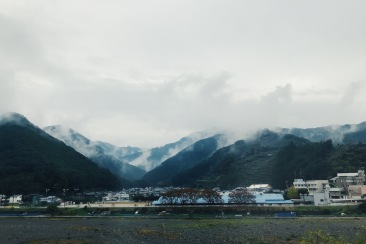 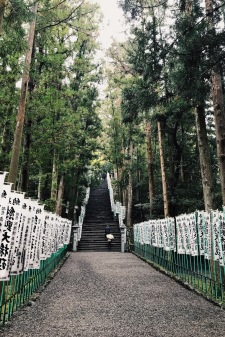 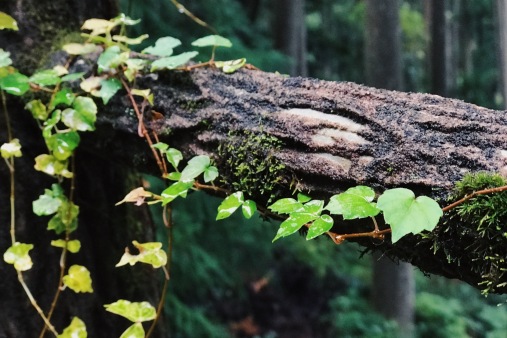 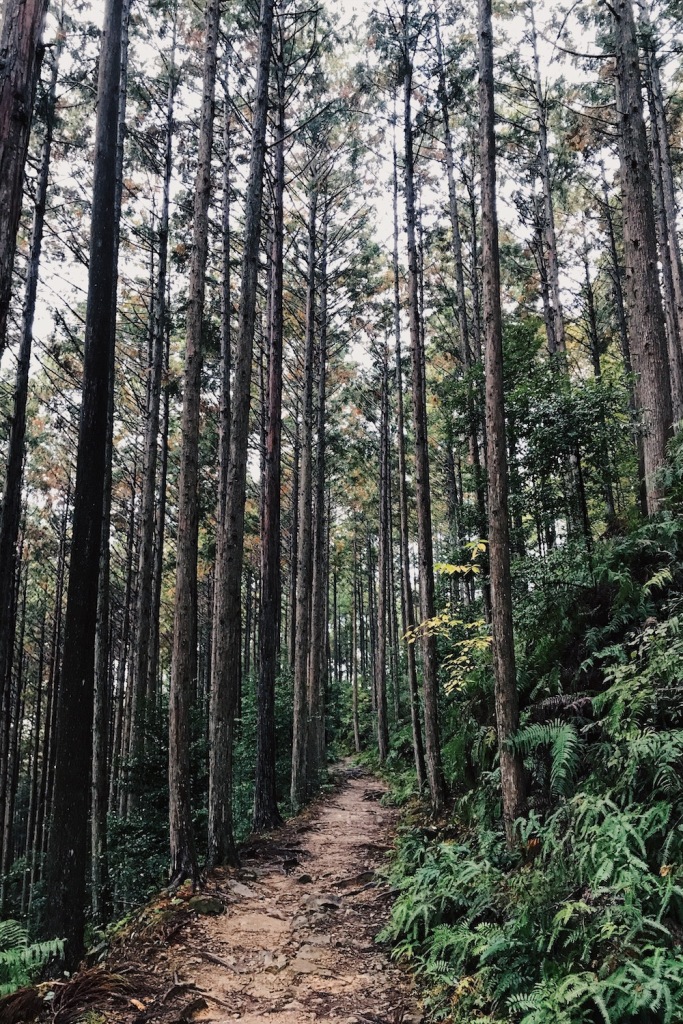 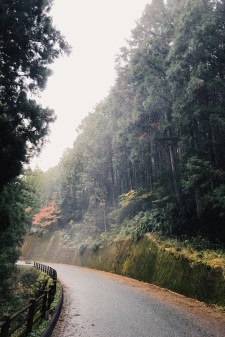 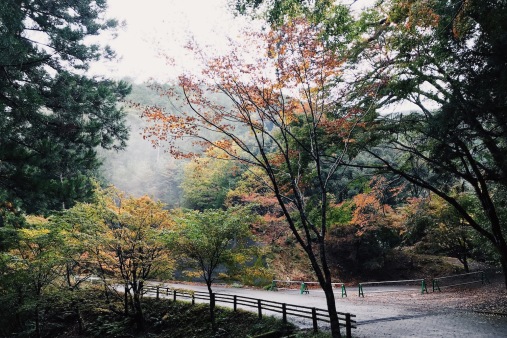 One of the impressive things was the facilities along the way: you never need to hunt for a hidden bush when you need the loo because there are proper toilets regularly along the way. There are also tea rooms and enclosed shelters at regular intervals too. 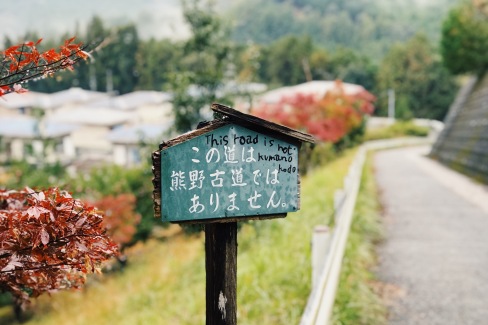 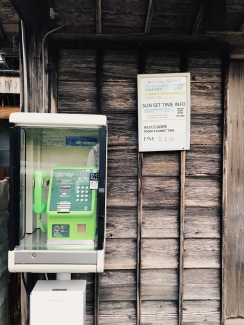 Left: The route was clearly signposted. We didn’t need an OS type of map and only had simple maps from various tourist information centres. There were even small signs like this saying “this is not the Kumano Kodo Route” to prevent people going astray. Right: “Do you have enough daylight to complete your walk safely? Don’t get stuck in the dark! Plan safely.” And it gives you today’s sunset time.

We did a 5km+ walk from the bottom of Daimon-zaka up to Kumano Nachi Taisha, then back down all the way to Nachi train station. The highlight was the 600m paved path called Daimon-zaka.

There were many middle-aged and old couples walking up the many steps to Kumano Nachi Taisha. It was really funny eavesdropping older Japanese people commenting on us skipping down the steps saying “wow amazing!” “so much energy!” (they clearly didn’t see me nearly fall over and twist my ankle on a flat tarmac road…). 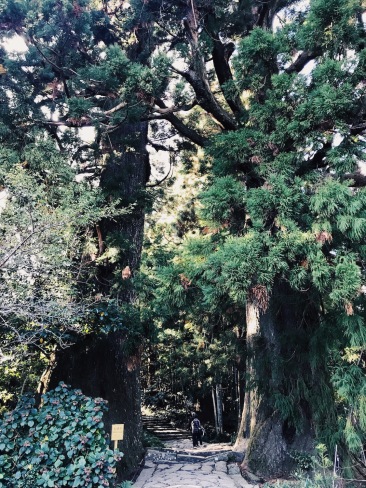 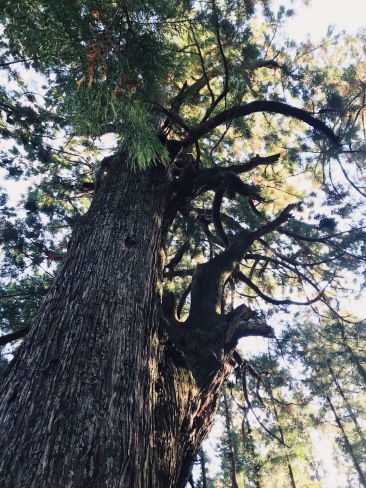 These two trees at the entrance of Damon-zaka are called ‘Husband and Wife Cedars’. Absolutely huge! I wonder if ‘the cedars of Lebanon’ looked like these? 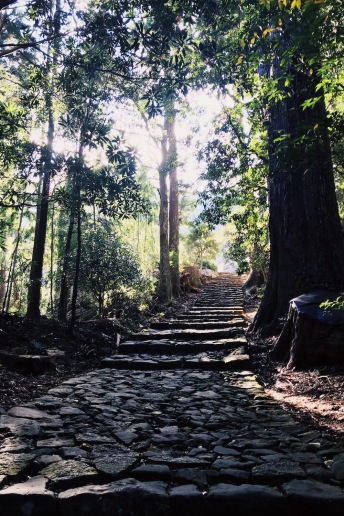 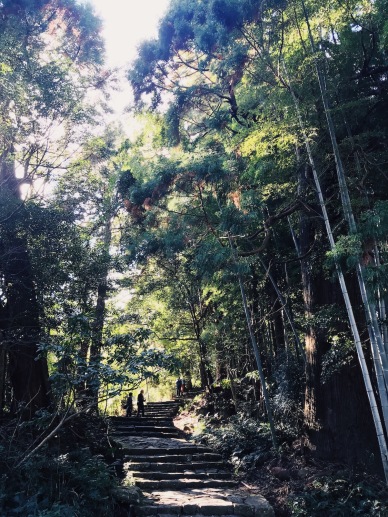 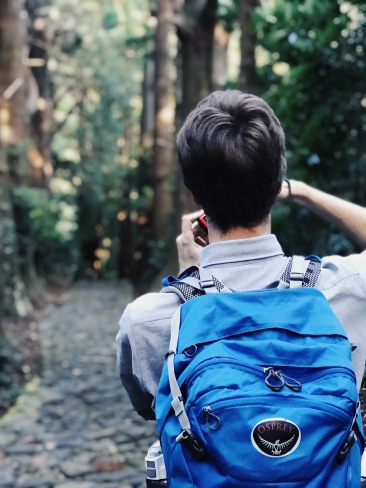 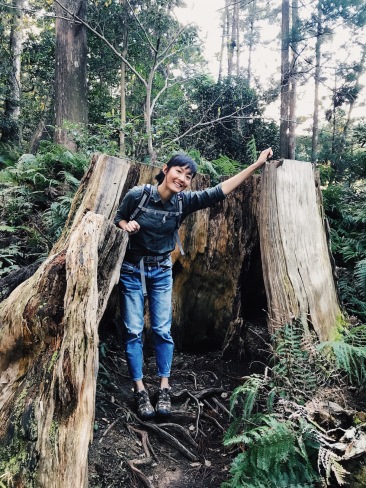 I’m not wearing appropriate clothes for hiking (e.g. cropped jeans?!) because my walking trousers got dirty from the previous day when I fell on some steps and sat in a muddy puddle…

Daimon-zaka section of the route was very popular (section highlighted in the red box on the map) and it was really enjoyable. But the rest of the route today was not all as picturesque. Some stretches were through neighbourhood streets which were flat and pleasant enough. But there was one particular section of the route which went through a scary wood. I really didn’t like it! Compared to the Lake District, mountains in this part of Japan are mostly covered in dense tree and bamboo plantation. I had this worry of (real) poisonous animals and (imaginary) scary creatures at the back of my mind a lot of the time! 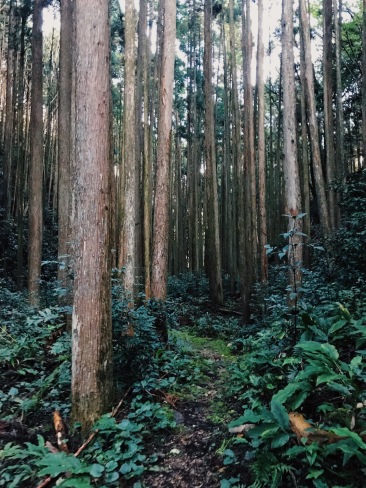 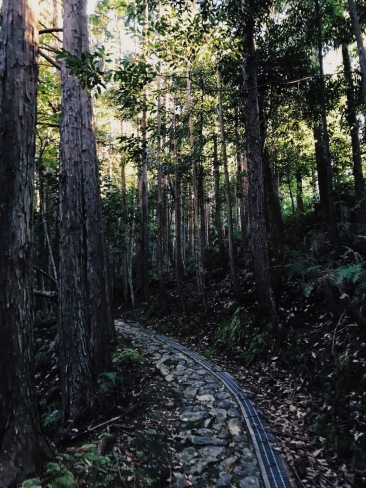 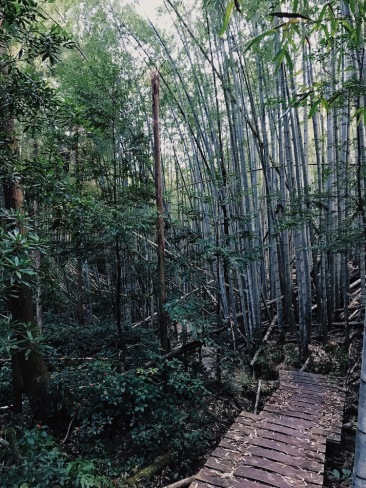 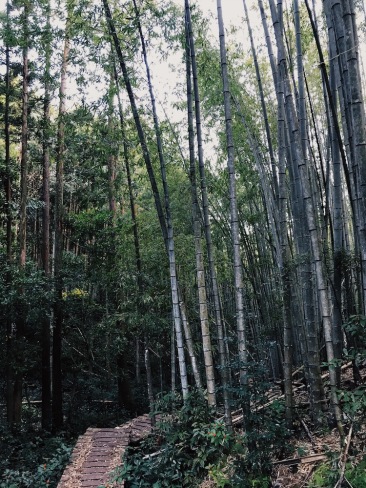 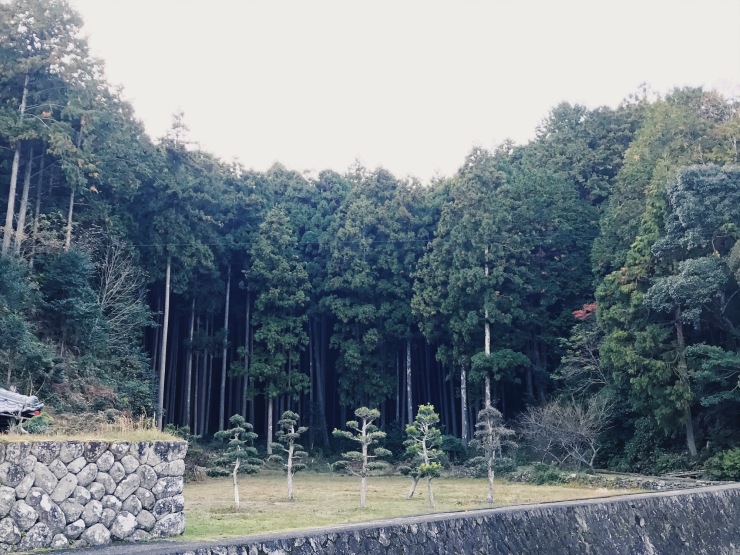 Looking back at it after we survived. No way I would go into it if I saw it from this angle. I was sure monsters were watching us…

Obviously, we did the walk without the spiritual meaning, unlike the locals. It was just because we want to see Japan’s countryside and do a longer distance walk. But collecting stamps at Oji along the way really added to the excitement of visiting shrines and walking along the pilgrimage route. “Oji are subsidiary shrines of the Kumano Grand Shrines that line the Kumano Kodo to protect and guide pilgrims. These shrines house the ‘child deities’ of Kumano, and serve as places of both worship and rest.” At each Oji, there is a stamp in a little house. They made the walk like a treasure hunt! 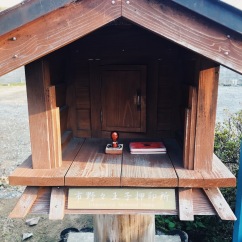 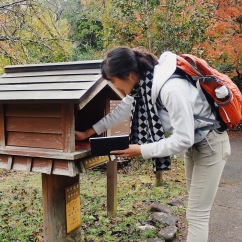 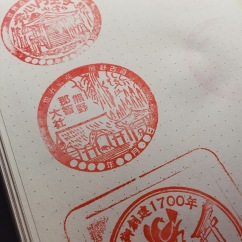 Not only along the Kumano Kodo route, many train stations and tourist interest places have them too. I really love collecting them as souvenirs.

That’ll do for the topic of walking. I’m going to my futon bed now. Goodnight!

All photos by Rong Fu.