This is a speculative* novel in the New Weird genre*. (Some explanations of these terms are at the end.) Overall it’s not my cup of tea. Way too weird. The author Jeff VanderMeer is the author of Annihilation, which was adapted into a film (2018) featuring Natalie Portman. That might ring a bell for you. I watched it and admired its cleverness but hated the experience. I know I’m a wimp. I am!

For this review, I’m NOT going to make the effort to NOT spoil it, but I’ll try not to spoil ALL of it… 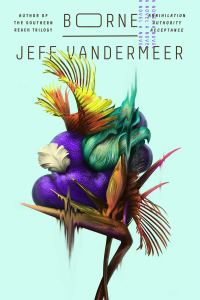 The story happens in a future of some sort and a city like ours but largely destroyed. The protagonist is a woman called Rachel, who lives as a scavenger with her partner Wick, who is a biotech engineer of some sort. They live in a bunker in hiding like everyone else in the City because it’s dangerous outside. The dangers generally come from three directions: firstly, there is a murderous giant flying Bear; second, there is the enemy of Wick, Magician, who has armies of deadly biologically-mutated children roaming; thirdly, everybody else in the City, who would trap and kill anyone to survive. So that’s the setting.

The story starts with Rachel discovering a rubbery anonymous object on one of her hunts. She takes it in, gives it a name (“Borne”) and loves and raises it as a child. And this thing turns out to be not as simple and harmless as she wishes. At the same time, her partner Wick becomes disapproving and jealous of this thing. Their relationship and living conditions get worse until one day their bunker is broken into and they have to flee. They struggle to the Company (I haven’t mentioned this, I know, I’ll explain a bit more later) while Borne battles the Bear. They kill the Magician while Borne finishes off the Bear. Everybody lives happily ever after. The end.

I like Borne. As a sea-anemone-looking non-human lethal being, Borne is endearing as he grows from a baby form to a mass that can change to either a giant bear or a carpet that covers miles and miles. There was one scene I liked particularly. Once, when Rachel and Borne were in danger, Borne enveloped Rachel and disguised himself as a rock. Sensing that Rachel inside was panicking, Borne formed a telephone on a shelf alongside a book inside the rock to calm her and to speak to her.

“The telephone shook like it was ringing. I picked up the receiver. ‘Hello,’ I whispered. ‘This is Borne. This is Borne calling you. ‘I know,’ I said. I felt like a child on a pretend phone, having a chat with an imaginary friend.”

That was my favourite scene. It seems to capture Borne perfectly, loyal, courageous, childlike. And Borne is consistent in his personality throughout. He’ll sell well as a soft toy I think.

The setting and scene building was atmospheric and affecting. The lawless world was convincing therefore truly horrible. I always put the book down and shuddered a bit looking around at my familiar living room and felt uneasy. And when I pulled myself out of it and could think of it as a novel, I always felt completely grateful for my lovely world even in lockdown.

Quite a few things bug me.

Rachel. From Rachel’s point of view, the issue with Borne is that he kills. I don’t get why she’s so bothered with it and keeps trying to ‘reform’ him. First of all, she kills nonchalantly herself; secondly, she insists that Borne is ‘human’ therefore shouldn’t kill, but Borne is a lot more like a wild animal, why shouldn’t a tiger kill? For her own selfish desire, she wouldn’t let Wick examine Borne at the beginning. Again for her own selfish desire, she later banished Borne and made him homeless.

The relationship triangle was very odd too. Why would a grown man be jealous of a piece of bio-tech?

What is the Company? The Company destroyed the City. It created the murderous Bear. It was where Wick worked. But in the end I still don’t get what role it plays. It’s hinted at in a couple of sentences but never fleshed out. There are too many treads not tied. Too much build-up with no climax.

Who is this Bear? There were a lot of background stories hinted at as well but nothing solid in the end. Same for the Magician. Was she powerful? Humour said she was. But if she was Wick’s enemy, Wick should be pretty powerful as an equal, right? But Wick throughout was just a thin, sulky, sickly man. Therefore maybe Magician was not as powerful as rumour had it? My instinct was right. In the last scene, Rachel bashed her head with a rock and she was dead in one blow. Who was she anyway? Too much build-up with no climax.

Borne kept saying all the people and animals he ate up were not dead but living inside him. I was excited and thought maybe Borne was a portal to another world that offers hope and solutions. But nothing came of that either. Those people and animals were just plain dead.

Towards the end, a letter revealed that Wick found and ‘adopted’ Rachel just like Rachel found and ‘adopted’ Borne, which I immediately thought was a lovely parallel and wondered if that would go anywhere. But no, it read like the author didn’t even notice it.

Jeff VanderMeer wrote quite a lot of things. I wonder if I started with the wrong book. Southern Reach Trilogy sounds clever (although I’m terrified by the film and not likely to read it now) and City of Saints and Madmen (collection of short stories) sounds quite wacky but the variety of form of each piece looks interesting. Dead Astronauts was published in 2019. A few dead astronauts featured quite prominently in Borne with no clear reason so I wonder if it will fill in some of the gaps for Borne?

Overall, I don’t like it personally. But I know many people do. If you’ve read it or you’re going to read it, I’d be interested to know what you think!

*If you’re new to all these like me, speculative fiction is a broad category of fiction encompassing genres with certain elements that do not exist in the real world, for example, science fiction, fantasy, horror, superhero fiction, alternate history, utopian and dystopian fiction, and supernatural fiction, as well as combinations thereof (e.g. science fantasy). And according to Jeff Vandermeer, the author of Borne, New Weird genre is “a type of urban, secondary-world fiction that subverts the romanticized ideas about place found in traditional fantasy, largely by choosing realistic, complex real-world models as the jumping-off point for creation of settings that may combine elements of both science fiction and fantasy.”