I love learning interesting historical facts, especially while watching a baking programme. This one is about doughnuts at wartime.

During First World War, Salvation Army tried to provide UK based American soldiers a taste of home by making doughnuts. It turned out to be a big success. The idea was used by American Red Cross again during the Second World War: doughnut plus “doughnut dollies” – happy, pretty, clever, well-educated (red lips and blonde hair) American girls who were hired to entertain the troop and serve doughnuts in service clubs.

The idea continued to be popular. Buses were converted into moving service clubs (called Clubmobile), run by dollies all over the UK, serving doughnuts.

“In June 1944, American forces were preparing to invade Northern France. (Here comes the amazing bit) Alongside the tanks and armoured cars, another vehicle was being prepared to cope with the war-torn terrain of Continental Europe. Nearly a hundred 2.5-tonne troop carriers were converted into clubmobiles, and the doughnut dollies had to ready themselves to enter a war zone.”

“In the layout of the clubmobile, it was a giant doughnut machine, so everything was fresh being served up. The doughnuts were not your supermarket doughnut that you get nowadays. They were hand cut and thrown into a deep-fat fryer. Sometimes they were a bit burnt, sometimes they were a bit undercooked. They weren’t always round. You were lucky if you got a hole in the middle.”

“……the clubmobile convoy advanced right across Europe, until victory was secured on May 7th 1945. During World War II, the Red Cross purchased enough flour to make 1.6 billion doughnuts, eventually serving them at a rate of 400 per minute.”

Unsung hero of the war, the doughnuts and doughnut dollies, weren’t they! 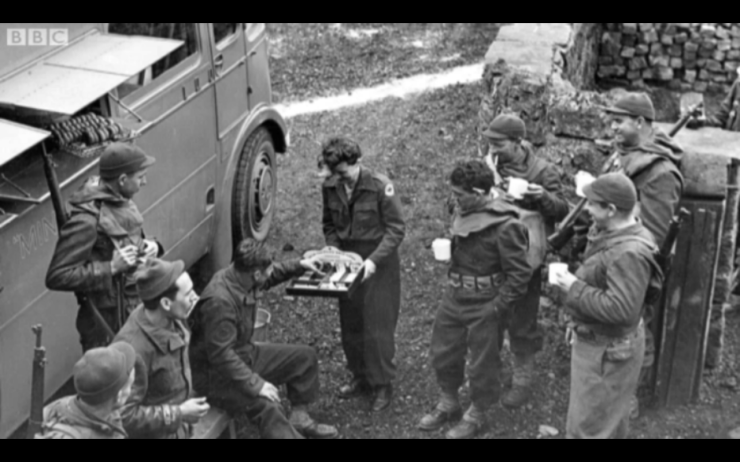